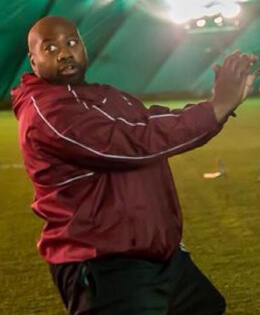 Osborne Highschool Marietta Ga 3 95-97 year starter 2 years team captain, lineman of the year junior and senior year.All county and played in the Georgia North/South all star game. Play junior college at Middle georgia college from 98-2001 red shirted first year.Started as redshirt freshman all 11 games and was all district and moved to center Sophmore year. Sophmore year started every game and made all district and became a junior college all American.Was lineman of the year both years and team captain.2001-2003 university of Memphis.Play gaurd as a back up roll junior year.Started the last 5 games as a junior and as a senior started 3 games and had to stop playing due to injury.Letter both years. Started back playing 07 in the Afl with the Arkansas twisters.Played both offensive gaurd and starting nose gaurd.First game 5 tackles and 1 sack.Started every game at gaurd the last night games.08-11 played offesensive gaurd and started every game.Was team captain and teammate of the year in 2010 and 2011.2011 was last year playing.